For the past few weeks, I’ve written posts mostly on food.  I think we’re due for a post on that little monkey we sometimes call Joshua.

In the last few weeks, we’ve had a few playdates, went to the Vancouver Aquarium for the first time, gone out for dinner with friends, had friends over for dinner, celebrated Chinese New Year, went snowshoeing, and went to the library for the first time.  Somewhere in between, I have taken hundreds of pictures of Joshua playing, eating, laughing, crying, running around naked, taking a bath, picking his nose, and generally goofing around.  I love downloading the pictures onto my computer at night, and looking through the pictures and savouring all the moments captured.

Joshua started walking back in December, and he gets better at it everyday.  Sometimes when I get home from work, I’m taken aback by how much bigger and taller he looks than yesterday.  He is totally crazy about books.  When I tested it a couple of weeks ago, he sat through 14 books I read to him.  I only stopped because we ran out of books.

In terms of language, we primarily use English with him just because that’s how Cliff and I communicate.  But I do make an effort to teach him small phrases in Mandarin, and use Mandarin whenever I remember to do so.  So there are some things Joshua know in Mandarin.  For example, we teach him “eyes” and “nose” in English, but “ear” (耳朵）and “head” (頭）in Mandarin.  We use “stand up” in English, but “clap hands” (拍拍手）in Mandarin.  I’m sure he is sufficiently confused with me mixing the languages, but I find it quite incredible that he always understands what I’m saying (that doesn’t mean he listens to me).

He says some things very clearly, particularly “mommy” and “uh oh” and “bye”.  Cliff thinks that he also says “what’s that”.  He’ll say the “bu” part of “button”, or the “ba” part of “box”.  I always find it hilarious that he will clearly say the “朵” part of “耳朵”.

He likes taking my Blackberry and putting it up to his ear, and say “hi” or “bye”.  He also constantly changes the language setting to Portuguese!  I’ve now erased all my speed-dial so my friends don’t constantly get phone calls from Joshua.  If you are wondering why I let him play with my Blackberry, well…it’s because it’s easier to let him play with it than dealing with him throwing a fit.

Joshua is a huge fan of breakfast.  I think he gets that from me.  He’ll drink up 200 mL of milk when he first wakes up, then proceed to eat 2 scrambled eggs, some pancakes if we make some, and sausages if we happen to have some.  Within 1 1/2 hr, he’ll eat a big bowl of rice cereal and some Cheerios, and maybe some GoldFish crackers if Cliff sneaks him some when I’m not looking.  He’ll also eat a decent lunch, and an afternoon snack.  He’s generally not interested in dinner.  He’ll take a couple of bites here and there, but mostly feed the food to Sam or throw it on me because I sit right next to him.  But lately he has actually been eating some dinner.  The other night I sauteed some kale, and put a few pieces on his tray for him to play with.  He actually ate some.  I gave him more, and he ate more.  He ended up eating so much kale that night.  I’m not fussed when he doesn’t like something, but it makes me happy when he is willing to try something new.

Cliff says he is enjoying Joshua so much more now that he is walking around and more interactive.  Even though I constantly lament that I miss the little baby stage, I do agree that Joshua is at a very fun age right now.

Things have been a little busy for the last week or so.  This is my last week of maternity leave.  I was determined that this week will be spent by savouring every moment I have with Joshua. Today the air was cool, the sky was blue, and it was a gorgeous fall day despite the wind.  We went for a walk to get some groceries and enjoy the sunshine.  Everywhere we went, the red and orange and yellow leaves took my breath away.

After the walk, we went home, had some lunch, then went down to the courtyard of the complex for some pictures.  The courtyard has a small patch of grass that is free of dog pee and poop.  When we first moved into the complex, I was quite unhappy about not being able to take Sam down there because of the stupid strata rules.  But now I am actually quite relieved that there is one patch of clean grass in Kitsilano that Joshua can play on.

I was thinking today how much life has changed since Joshua’s arrival.  Sometimes I wonder what I would be doing if we didn’t have Joshua.  Mostly likely, I’d just be slaving away at work, and dreaming of the next vacation.  For many years I didn’t want children because I was terrified of screwing up someone’s life.  It took me a long time to come to terms with the fact that even the most amazing parents screw up somewhere, so I’ll just have to do my best and take the hit when my kid tells me where I screwed up.

I’ve enjoyed this past year so much, which makes going back to work much more difficult.  I’ve had so much fun.  I can recall maybe two or three really rough days, but it was complete bliss the other 362 or 363 days. 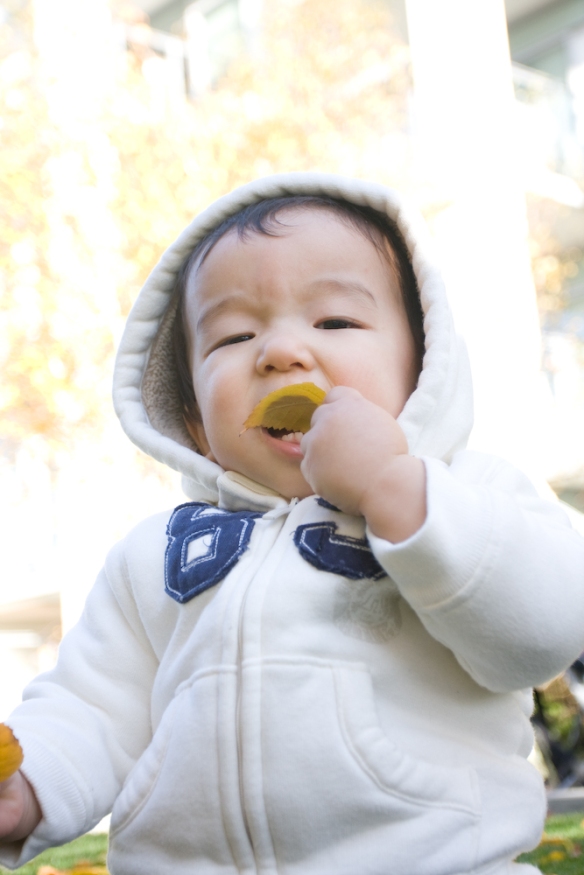 This week’s appointment with Dr. L was uneventful. I was glad to find out I dropped a pound. It must be all the long walks and cutting back on starch/sugar. Other than that, everything was normal and on track.

Starting last week, my right hand became constantly numb. I googled the symptom and it appears normal as a part of the pregnancy. I did ask Dr. L about it, and she said that it’s likely carpal tunnel caused by nerves being pinched during pregnancy. She wasn’t too concerned about it. I do hope that the symptoms will go away once the baby is born.

My lower back pain seems to be under better control because of the daily walks. Walking seems to loosen up whatever was causing the pain. I also noticed that my calves have not cramped even once since I started the long walks. I enjoy going for walks with mom. We chat, check out shops, and stop for coffee. It makes the walking seem less like an exercise but more of a fun thing to do with mom.

When I walk uphill, I often get the Braxton Hicks contractions. Sometimes it makes me a little nervous, wondering if it’s a real contraction. Nevertheless, walking feels really nice, even when I’m huffing and puffing going uphill. I hope Joshua will enjoy sitting in a stroller and going for walks too, because I do want to go for daily walks when I’m on maternity leave.

Despite the discomforts, thankfully, I do sleep quite well. I have so often heard of pregnant women not getting good quality sleep because of all the discomforts. For me, other than getting up twice a night to go to the bathroom, I sleep quite well. Once a while I would wake up because my arms are numb or my calves cramp, but other than that, I’ve never been woken up by Joshua kicking or from other discomforts. I guess I’m lucky in that regard.

It’s now the start of my third week off work, and I’m really enjoying this time. I’m getting lots of rest, exercise, and relaxation.