A while ago, I posted about the Adventures of Baby Bear.  This little pink bear goes EVERYWHERE with Joshua.  He truly loves this bear.  I have seen him come home from preschool, running to the bear, picking it up with both hands, and say, “Oh, baby bear, I love you soooo much!”

We don’t teach Joshua that pink is for girls.  I don’t believe colors should be gender-specific, at least not at his age.

But you know what I’ve realized about myself?  I have these ideals in my head, like teaching Joshua that colors are not gender-specific, and that it’s ok for a little boy to carry around a pink bear.  But I am also afraid of what other people think of these ideals, like what if a kid made fun of him, or bullied him because of it?  On one hand I want to raise this confident and happy child who can make his own choices, and on the other hand I’m so jaded that I want to make his choices for him so he will “fit in”.

We took the kids on the sea bus for the first time on the weekend.  Joshua insisted on bringing Baby Bear so she can go on the sea bus too.  While we were waiting for the sea bus, Joshua went to stand beside these two older boys.  One of them took a look at Joshua’s bear, did a little eye rolling, and said something to his grandma about pink bear.  My heart was in the pit of my stomach, thinking my worst fear has come true.

Over the course of the sea bus ride, Joshua made friends with the two boys, and they ended up sharing their toys with him.  There was no further discussion of the pink bear.

I write this to sort through my own thoughts.  I think as much as I fear that Joshua may not “fit in” while carrying a pink bear around, I am so envious of him.  He doesn’t worry about what people think of him.  He wears his heart on his sleeve.  He is not afraid to show how much he cares about something.  He is secure and confident in his choices.  Those are all qualities I wish I have.  I certainly do not need to be the first person in his life to tell him to worry about what others think of him. 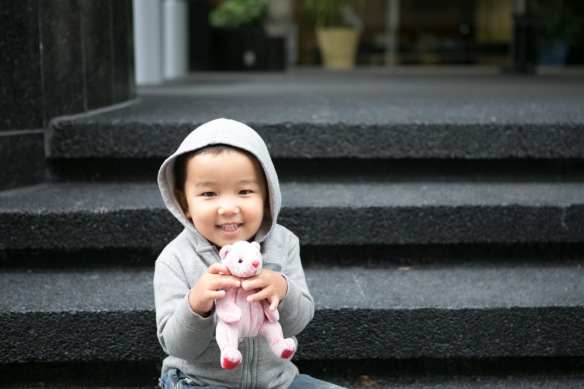 3 thoughts on “The pink bear”