Savanna is now a week old.  It’s amazing how fast time flies when you have these little beings around to blur together the days and the nights.

Having a scheduled c-section to deliver a baby is not the most eventful way to bring in a new life.  You show up at the hospital to be checked in, there are standard procedures to follow, a million questions to answer, meet more nurses and doctors and med students and various people than you can remember, and then you walk into the operating room with you own two feet, holding your own IV drip bag.

Just to make things a bit more interesting, the spinal freeze they gave me didn’t work.  After the freeze was administered, the anesthesiologist pinched me and I winced.  She was a bit surprised, and said, “You can feel THAT?”  I replied, “Uh, yes.”  She had a puzzled look on her face.  I thought, oh boy, this is not a good sign.

It turns out that for whatever reason, the left side of my body froze with no problem, but the right side remained un-frozen.  So if they were to cut me open, I’d be feeling the scalpel.  Not cool.

They turned me to lay on the right side of my body, hoping gravity will work to get the drugs into the right side of my body.  After 10 minutes, the pinch test was still a fail when I can still feel the pain from her pinch of my belly fat.  The anesthesiologist talked things over with other doctors, and decided to try giving me an epidural on top of the spinal freeze.  She said if that doesn’t work, they will have to give me general anaesthetic to put me under.  I said to her to do whatever it takes so I can stay awake for this delivery.  I’ve already been put under for Joshua’s birth and will never get that moment back.  I’m NOT going to sleep through this one too.  So another big needle went in my spine, and this time, it worked.  I felt no pain from the chest down.

The operation took longer than usual, because the emergency c-section to get Joshua out last time left a lot of scar tissue for the surgent to deal with.  So rather than baby coming out in the first 5 or 10 minutes, they didn’t get to her for almost half an hour.

It’s weird having a spinal block.  I felt no pain, but I can feel all the tugging and pulling they were doing.  When they said they were finally going to Savanna out, the pressure felt like someone was sitting on my chest and bouncing up and down.  I think they were pushing down on my rib cage to squeeze her out.

As soon as she came out, I heard her cry.  Someone lifted her above the blue tarp so I can see her.  She was covered in a layer of white slimy stuff.  Cliff and I had a brief minute with her on my chest before she was taken to get checked over.

I laid there waiting to be sewn back up and waiting for Savanna to be brought back to me.  I starred blankly at the ceiling because I really had nothing to look at other than the big blue tarp they draped over my chest.  I can hear Savanna crying and the doctors chit chatting.  All I could think of was, would someone please just give me my baby already!

Then I started to feel pain on the right side of my belly and the pain got sharper pretty quickly.  I asked the anesthesiologist if that’s normal, and she seemed to be surprised again.  She thought the epidural may have worn off already, so she gave me another dose of it.  Then as quickly as it came, the pain went away.  I’ve now got a spinal block and two doses of epidural in me.

They had to put Savanna under the heat lamp to bring her temperature up.  The amount of time it took for me to be ready for surgery was so long that my temperature dropped in the freezing cold operating room, so she came out cold too.  After what felt like forever, she was finally warm enough that they wrapped her up to be brought over to me.  I touched her little face while Cliff held her next to me. 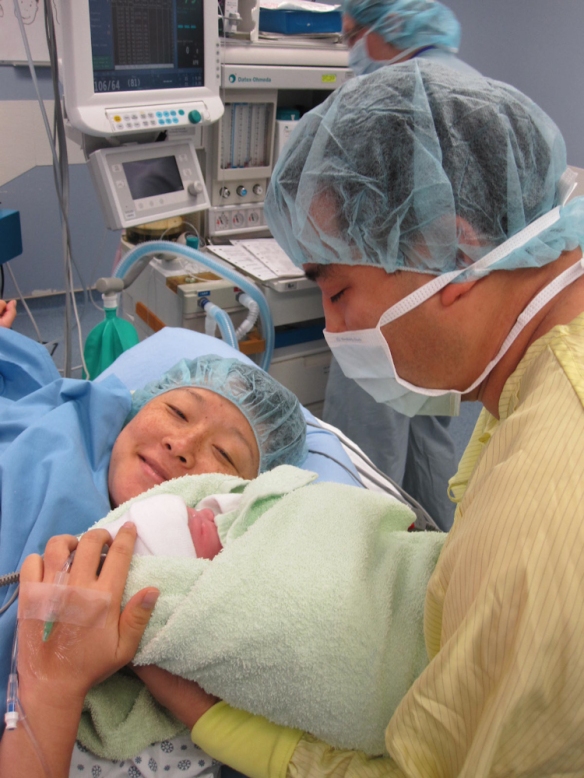 The first few days after the c-section, I was a total emotional wreck.  One night Cliff came to the hospital after putting Joshua to bed, and he found me in the dark, holding Savanna, and sobbing like a mad woman.  I had bursted into tears because 2 days after giving birth I still wasn’t producing any milk, and Savanna was clearly hungry, frustrated, and crying a lot.  I felt so guilty and so angry that my body wasn’t cooperating, that I just lost it.  Then the second day after we got home, Joshua was having issues with being very whiny and clingy.  I think he finally felt the difference it makes to have a new sibling at home.  I sat on the floor of his room and cried my eyes out while holding him in my arms.  I felt so guilty for dragging him into this new family dynamic.  We were doing fine with just the three of us, but I selfishly wanted another baby, so I threw him into this situation against his will.  Other little things would set me off and I would just cry and cry and cry.  I was sure I was going mental.

Then magically, on the 5th day, I felt better.  The crazy thoughts went away, and I felt like myself again.  I have no idea what made the switch, but I was so happy to have found my marbles again!

Anyway, it has been an interesting week with the ups and downs, all the while adjusting to the new dynamic of a new family of four.  It is amazing how my heart just all of a sudden grew 3 sizes the day Savanna was born.