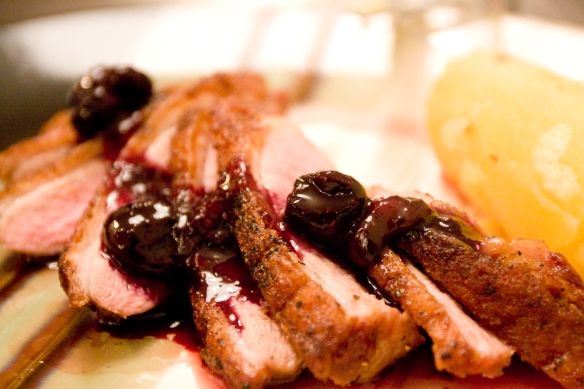 The past week has been quite rough.  After Christmas, Joshua came down with the flu, and then he generously shared it with me.  So we had to cancel a bunch of the plans we made with friends during the Christmas week, and stayed home for quite a few days in a row.  I missed almost 2 days of work because I was just sick like a dog and could barely breathe.  I couldn’t hear what my co-workers were saying to me because my ears were plugged.  Wah wah wah…ok, enough with the whining.

So, today I started to feel a bit more human.  I’m still recovering, but at least I can breathe through my nose again, and no longer feel like I’m submerged under water.  It also happens to be my day at home with Joshua.  We headed out to check out Windsor Meats and McGillicuddy’s at Mackenzie Heights.

I wanted to do something a little different today.  So I decided to try making duck for the first time ever.  I don’t recall my parents ever making duck when I was growing up, and Cliff has never made duck before.  It’s just not something we normally eat.  I’ve had it a number of times in restaurants and always enjoyed it, but for some reason never tried cooking it.  Anyway, the butcher at Windsor Meats was very friendly.  I ended up walking out with more than just duck meat.  I’m a total SUCKER for friendly service.

So for the duck breasts, I followed a simple pan sear method of preparing it.  Then prepared a separate sauce to go on the duck breast.  The pan searing worked really well (plus 7 minutes in the oven), and the meat was tender.  The sauce was supposed to be an orange chipotle sauce, but I screwed up and put way too much chipotle in it that it became unbearably spicy.  So I ended up doctoring the sauce with blueberries trying to mellow it out.  At the end the sauce was kind of ok.  I think it would have been quite good if I had some sugar or syrup to add in it.  Damn South Beach diet.

Ultimately, Cliff enjoyed the meal, and that was good enough for me.