We were at the Granville Island Farmer’s Market earlier this week.  We happened to see our favorite spices guy, Maison Cote.  While chatting with him about some of his rubs, he mentioned in passing that we should try cooking salmon wrapped in fig leaves.  Apparently the fig leaves will make your salmon taste like coconut.  Sounds heavenly!

So we dropped in on Cliff’s mom this afternoon and took some fig leaves from her fig tree, and stopped by CostCo to pick up some wild sockeye salmon.  I looked up some recipes on the internet, and they all seem fairly basic–season the salmon with salt and pepper, wrap the fish in fig leaves, and bake in the oven.

Here’s what we did:

Season salmon with salt and pepper, and drizzle with olive oil: 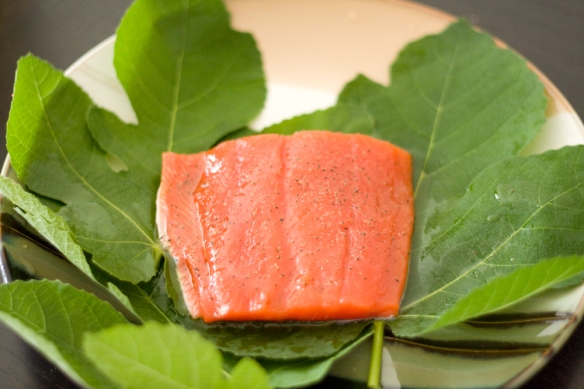 Wrap the salmon in fig leaves (3 or 4 leaves, depending on the size of the leaves and your fish).  Preheat BBQ to 350 C.

Place the salmon packages on the BBQ, cook for 10 minutes, and turn the package over and cook another 3 or 4 minutes:

Discard the leaves and serve the salmon with freshly squeezed lemon juice: 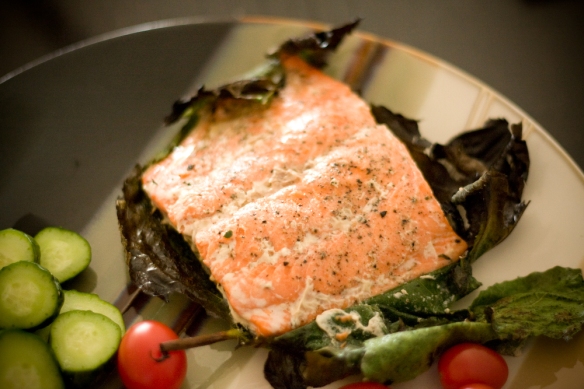 Well, the fig leaves definitely gave off the coconut aroma.  Our place smelled like sweet coconut for at least an hour after dinner.  The salmon was super juicy.  However, the coconut flavor didn’t really get into the salmon.  It may have been there, but it would have been quite mild.  Also, because the salmon was wrapped in the leaves, it loses the BBQ salmon characteristics.

Overall, I enjoyed the experience of trying this dish.  It was a fun dinner to make.  The flavor is a bit too mild for my liking though.