I took Joshua to Fraser Health Authority yesterday to meet with a registered nurse specializing in breastfeeding. I was hoping she would be able to shed some light on our breastfeeding battles at home. Disappointingly, she was not all that helpful. She commented that Joshua’s latch seems pretty decent, and with domperidone’s help I should eventually make enough to feed him.

Since we started supplementing with formula, I started pumping to give breast milk by the bottle to Joshua. After a few days of doing so, I was getting tired of getting hooked up to the machine multiple times a day to pump. I started to think that it’ll be much nicer to be able to nurse him directly.

So with the public health nurse’s encouragement, I started nursing again. But now that Joshua has experienced the bottle, he is not so interested in the breast. Understandably, nursing at the breast is a lot more work than drinking from the bottle. So now every feeding time feels like a battle. I would put him on the breast, and he would fuss and cry and get frustrated. I would then feel frustrated with all the crying, and think that it’s just so much easier to put the bottle to his lips.

On one hand, I want to just wave my white flag and say forget the breastfeeding fiasco. On the other hand, I would feel too guilty if I don’t continue trying. Oh, I wish someone can just tell me what to do!!

The iPod app that helps us keep track of all the feedings and diaper changes:

Despite the breastfeeding battles, he is almost 9 lbs after 2 weeks of life: 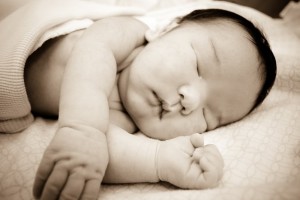