Hanging out with Daddy at home in the morning:

It was a very emotional day for me today.

We went back to see Dr. Cadenhead. Joshua’s weight has now dropped more than 12%. Dr. Cadenhead checked the way I nursed him (which was correct), and decided that my body just wasn’t producing enough milk for Joshua. The whole time in her office, Joshua screamed and cried. He was frustrated with the nursing, and he turned totally red.

Dr. Cadenhead was concerned with his weight loss going over 10%. She told us to go straight to Children’s Hospital emergency, so they can perform blood work on him. She sent us away with some formula samples, and told us to go quickly.

I started crying in the doctor’s office. She assured me that I haven’t done anything wrong. Rather, some women just do not produce enough milk due to various reasons and there’s nothing they can do about it. Dr. Cadenhead gave me a prescription of domperidone to help with milk production. She said she had the same problem, and the prescription didn’t really help her, but I can give it a shot anyway.

I cried the whole way from Dr. Cadenhead’s office to Children’s Hospital. I felt like such a lousy mother. I tried so hard to breastfeed him, believing that was the best for him. What transpired was that his weight dropped beyond a normal range, and now we have to take him to the emergency department! I was exhausted from all the long hours of nursing, and yet all that was not enough to keep my baby at a healthy weight.

Before Joshua was born, I wasn’t all that concerned with breastfeeding. I figured that if it works, great! But if it doesn’t work, there’s nothing wrong with formula. I grew up on formula, and so did many other people I know. I didn’t think it’s a big deal one way or the other. But somehow during the hospital stay, between the nurses all kept checking if Joshua was latching properly, and stressed the importance of breastfeeding exclusively, I felt like I had to make breastfeeding work or I am a model bad mother.

I’ve always stubbornly believed that my input into an event has a direct result on the output. Therefore, if the output is not what I expected, then I tend to think that something is wrong with my input. With this type of thinking, I began to doubt myself about everything related to Joshua. Maybe if I hadn’t put on so much weight during pregnancy, he wouldn’t be over 8 lbs and maybe then I could have had a natural delivery. Maybe if I hadn’t checked out of the hospital so soon, he wouldn’t have been at the point of being sent to Children’s Hospital. Maybe if I just did something differently, I would have produced enough milk to feed my baby.

Arriving at Children’s, they took his vitals, asked a lot of questions, and decided against doing any blood work on Joshua. They were concerned that he was too dehydrated, that taking even a small amount of blood will cause him harm. What they wanted us to do was to just feed him formula to get him hydrated. A nurse warmed up a bottle of formula and handed it to me. Joshua drained 40 ml of the formula, and fell into a deep sleep.

The doctor on rotation that night came in to check on Joshua. He said that forget the breastfeeding for now, and just make sure that Joshua gets enough to eat for the next few days. He kept us there to continue to feed Joshua so they can observe him. We were there for about 6 hours, and Joshua took in about 150 ml of formula. He slept the entire time, happy and calm. The doctor felt Joshua was going in the right direction, and decided to let him go home based on the condition that we go back to Dr. Cadenhead the next day to weigh him again.

I went home that night feeling both some failure and relief. I felt like I failed in breastfeeding department, but relieved a little that at least for a couple of days I can let my very sore breasts rest.

First trip to the emergency room: 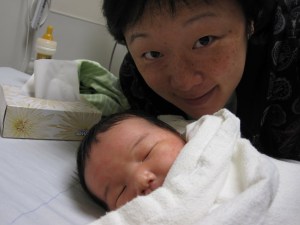