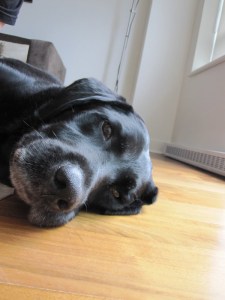 I’ve had many people tell me that once Joshua is born, Sam will move down the priority list to the bottom, and we will begin to neglect him. The thought of neglecting Sam has caused me tears and a lot of emotion. We’ve had Sam for 3 1/2 years, and he has been one of the best things that has ever happened to me.

We waited a long time before finally deciding on adding a dog to our family. Once I finished my CGA studies, and Cliff’s job seemed to be stable, that’s when we felt like was a good time to get a dog. The biggest bonus is that Cliff could take the dog to work at GM. I really liked the idea of not leaving the dog at home all day by itself.

When we first laid our eyes on Sam, we fell in love instantly. We met his previous family at Queens Park, took Sam for a walk, and we were hooked on the spot. Sam was just over 90 lbs, pure black with a shiny coat, and a very low key yet goofy personality. I still remember waiting a week before we were able to go pick up Sam, and that felt like the longest week of our lives. We were so excited that we’ll be getting Sam, and so worried that his previous family would change their minds. When we finally got to go pick him up, we were just giddy!

On the car ride home from Mission, Sam fell asleep in the back seat. He came into the house (this is when we still lived at Balmoral St), he sniffed around, and settled down in the living room. For a few weeks, he seemed to be a bit unsure. But then quite quickly he settled into a routine with us, and he just very naturally became a part of the family.

It was never a chore to care for or be with Sam. He has the most forgiving personality, most gentle soul, and most loving nature. He is the family dog that anyone could ever want to have. After 3 1/2 years of having Sam, we are just more in love with him than ever. I can write about Sam for hours and hours!

I have secretly promised Sam that he will not be neglected because of the new baby, even though I have no idea what it would be like to have a newborn. I am excited that Joshua will grow up with Sam. I consider it a privilege to have Sam in our lives.