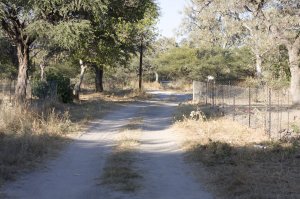 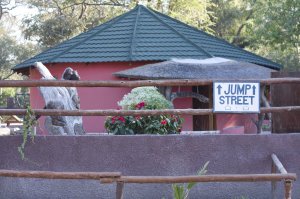 A corner of my room:

My first weekend in Maun is almost over.  I arrived on Saturday morning and settled into my accommodation.  This morning, I ventured out to the Old Mall to get groceries.

I knew the approximate direction of the Old Mall, but wasn’t clear on exactly where it is.  I could just order a taxi to take me from Jump Street straight to the Old Mall.  But to complicate things, I decided to walk from Jump Street to the tarred road and wave down a taxi myself.

The cheapest way to travel is taking a mini bus called combi.  It’s a van that crams in 12 to 15 people.  I believe it’s only 2 or 3 Pula to get across town.  But when I asked the hotel lady how to take a combi, she strongly discouraged me to take it because she was afraid I would get on the wrong combi and get lost.

It was a balmy 20 Celsius at 8:30 am.  When I first came out of the Jump Street gate, I was marveling at all the colorful birds chirping away in the area.  The sky was clear and cloudless, and the sun was shining.  The air was warm and comfortable.  I was happy, and started down the dirt track.

The walk down the dirt track which is covered in fine sand took about 25 minutes.  I got to the tarred road, and took my runners off to dump out the sand.  A few minutes later, a taxi honked at me and I waved him down.  I asked if he can take me to the Old Mall, and he said yes.  There are already two other people in back seat of the taxi, so I got in the front.  The taxi started driving, and stopped 100 ft later to pick up another man.  With a full car, he drove us into town, and dropped people off at various spots along the way.

This type of taxi is a very common as the mid-range travel method.  My ride cost 3.20 Pula, which is about 50 cents C$.  The drivers pick up and drop off people along the road.  No one is ever really in a big rush with this type of travel.  Once in the taxi, it took less than 10 minutes for me to get to the Old Mall area.

I remembered that in the old days in Taiwan, this is a cost effective way to get from point A to point B.  They called it the “wild chicken” taxi.  The taxi would stop at the busy areas in town, such as a big train station or bus loop, and call out the route they are taking.  If you hear a driver call out a route close to your home, you jumped in the taxi with 3 or 4 others, and the driver dropped you off close to your home at a fixed fee.  I always wondered if the “wild chicken” referred to the passengers in those taxis.

In Botswana, you can also take a taxi that is private.  All it means is that the driver will not stop for others along the road.  This is used when you are going off the main roads for more than a few blocks.  You negotiate the rate before you get in.  After I got groceries, I had to take one of these for 15 Pula, because Jump Street is quite a bit off the main roads.

The taxi driver dropped me off at ShopRite, a big grocery store.  It looks a lot like a supermarket in North America, dated perhaps 10 years back.  I managed to get everything on my grocery list, including feta cheese and Thai green curry paste.  The cashier lady was not impressed that I didn’t have the weight sticker for my potatoes.  It really showed my ignorance assuming that my bag of potatoes will get weighed at the check-out.

A lot of the shops in town are not open today because it is Sunday.  So after getting groceries, I took a taxi back to Jump Street to hole up in my room.  It feels odd not having a bunch of errands to run on a weekend.

I made some chicken curry for lunch.  I also attempted to cook some samp for the first time, and burned the whole pot of gooey mess.

It will be my first day at work tomorrow.  I’m both excited and a bit nervous.

2 thoughts on “First Weekend in Maun”